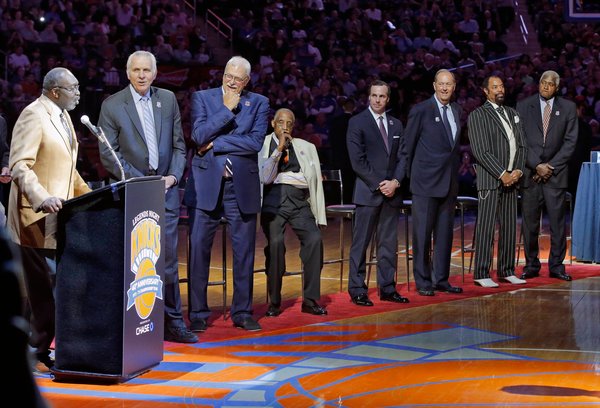 Jerry Lucas found it easier than most to let go. He had a couple of years remaining on his contract with the Knicks when he retired in 1974, but he wanted to do something more important with his life. He had a plan. Lucas always had a plan.

He was never the type to do things halfway. Why, for example, would he memorize one page of the phone book when he could memorize 500? Such were the feats of mental gymnastics that shaped Lucas’s reputation as one of the N.B.A.’s more iconoclastic personalities, that landed him on the “Tonight” show. But his self-described capacity for learning, for using his brain, was also what guided the next 40 years of his life.

In his never-ending quest to help educate the rest of humanity, Lucas, 73, has been working on an animated Web site that he hopes to unveil in December. It will be known as Doctor M’s Universe — Lucas is Doctor M, short for Doctor Memory — and he said it had the potential to change the world.

“I have an opportunity, in the near future, to revolutionize education,” Lucas said, adding that the site would be geared toward children. “There will be hundreds of learning planets: a writing planet, a reading planet, a spelling planet, a grammar and punctuation planet, on and on, where youngsters will fly their own spaceships at warp speed to go to learn automatically. That’s why I left basketball: to devote my life to this.”

Lucas was at Madison Square Garden on Friday for a reunion of the Knicks’ 1972-73 N.B.A. championship team, and he relished getting together with the old gang. Lucas, a 6-foot-8 forward, was an indispensable member of that team, which was full of distinctive stars.

“We had more plays than any team in the N.B.A. because we were smarter and we could remember things,” Lucas said. “And if my teammates couldn’t remember them, I’d teach them how. It was just so much fun.

“I was so excited when I was traded to the Knicks. I mean, I was thrilled.”

As a player, Lucas was a captivating presence — to fans, to teammates, even to opponents. Consider how Lucas and Bill Bradley created a language they used when they were on the court together.

“We liked to use our minds, and we liked to fool with opponents,” Lucas said. “They had no idea what we were doing. Bill would say something like ‘Innie gotcha walka deeky bongo.’ And I’d say, ‘Shaniya vooto saweeka sata.’ And that meant something to us. Didn’t to anyone else, not even to our own teammates.”

Bradley could have been telling Lucas to cut backdoor on a give-and-go, or to switch on the next ball screen. Their bond was instinctive, Lucas said, and that underscored the team’s chemistry.

Lucas, teammates said, was unselfish to a fault. He might have been able to keep a running box score in his head (which he was known to do), but statistics never really meant that much to him, especially during that championship season. He came off the bench to average what was then a career-low 9.9 points a game, but he also averaged 7.2 rebounds and a career-best 4.5 assists.

Henry Bibby, who was a rookie with the Knicks in 1973, said he initially found Lucas to be a distant presence, a bit standoffish. Lucas grew warmer as they developed a relationship, and Bibby said he learned a great deal about the intricacies of the game from him.

“He was a genius on the basketball court,” Bibby said. “He knew where everybody was supposed to be. He even knew the other team’s plays.”

Lucas accomplished everything he could in basketball, and he is not particularly shy about saying so. He will tell you about his state championships in high school, his N.C.A.A. title at Ohio State, his N.B.A. championship with the Knicks and his gold medal at the 1960 Summer Olympics in Rome. In an 11-year N.B.A. career, he averaged 17 points and 15.6 rebounds, and he was enshrined in the Hall of Fame in 1980.

In his life after basketball, Lucas has visited schools and churches, written books, and run a shelter for abused dogs. He has high hopes for his new Web site, he said, and he plans to relocate from his home in California to join his production team in Florida. Lucas gave up basketball, but he never retired.

“My mind has not diminished much at all,” he said. “I’ve used it every day of my life: writing, creating, developing. My doctor about six months ago said, ‘Jerry, I want to take a picture of your brain.’ I said, ‘Why?’ He said: ‘Well, I think it’s got to look different. When people age, certain things happen.’ So he took a couple shots of my brain, and he said, ‘Your brain looks like you’re 18 years old.’ That’s because I’ve used it so much.”